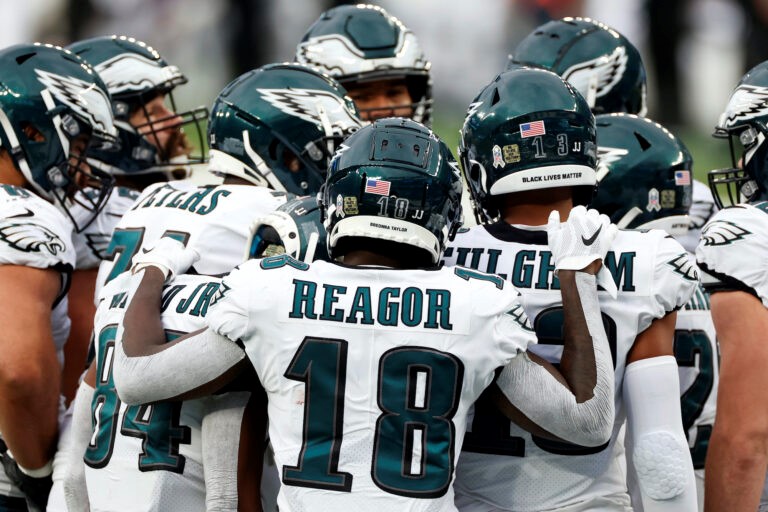 On January 3, 2021, the Eagles ended the season with a 4-11-1 record, a conclusion that disappointed both fans and the Eagles organization. That 4-11-1 record gave the Eagles the 6th pick in the 2021 draft, which they then traded to Miami, receiving the 12th pick, the 123rd pick, and a 2022 first round pick. With the draft mere days away, a question arises: What will the Eagles do with the 12th pick?

While the Eagles have already traded a pick in this draft once, it is still very possible that they trade their pick again. The Eagles trading back again would not be the end of the world, as this is a loaded draft class, with the entire first round being full of talent. The Eagles can fill their needs in the later parts of the first round, as there will still be great receivers, linebackers, and secondary players in the late first round. The Eagles also have the option to move back up if they wish. While the whole first is loaded, there is a definite skill gap between the top 10 prospects and the rest of the first round, so the Eagles moving back into the top 10 would help them grab a better player.

If the Eagles choose to hold onto the pick and Smith falls to the 12th pick (as many project he could), the Heisman winner would be a great addition to the Eagles wide receiver core. Smith stands at 6’1”, 174 lbs, which are not very impressive measurables, but he is a can’t miss prospect. He is lighting quick, running a 4.27 40-yard dash, which ties him for the fourth-fastest time since 1999. His speed, route running, and great hands allowed him to pull down 117 receptions (24th most in a single college season ever), 1,856 receiving yards (6th most in a college football season ever), and 23 touchdowns (5th most in a college football season ever). This type of pure talent is rarely seen, and if the Eagles have the chance to take Smith at 12, he would be hard to pass up.

While Smith would be a great pick, so would his Alabama teammate Jaylen Waddle. They were primed to be the best duo in college football before injury ended Waddle’s season. Waddle’s measurables are less impressive, standing at just 5’10”, 183 lbs. He does not have a measured 40-yard dash time in college, but in high school he ran a ridiculous 4.37. Comparatively, Waddle is the better route runner on short and middle routes, while Smith is the better deep route runner. Since Waddle is coming off an injury, he could fall out of the top 10 and land in the Eagles’ hands and be another great addition for their receiving core.

Horn is known as a stifling corner and is one of the top cornerbacks in the draft. He stands at 6’1”, 215 lbs. He is ridiculously speedy, running a 4.37 40-yard dash. Horn only played a total of seven games for the Gamecocks in 2020, during which they were 2-5. Horn, deciding not to risk injury for a losing team, opted out of the rest of the season to prepare for the Draft. His best game of the year came against 15 ranked Auburn, when he had two interceptions in one of the team’s two wins. With an Eagles secondary that is always weak, and is always destroyed by injuries, adding Horn would help strengthen and deepen the secondary.

Surtain, another member of the Crimson Tide, is an outstanding corner who is known to shut down any receiver who lines up across from him. He stands at 6’2”, 203 lbs, and runs a 4.46 40-yard dash. Surtain was the defensive anchor that led the Crimson Tide to the National Championship, locking up Notre Dame recievers like Ben Skowronek and Avery Davis, and Ohio State recievers Garrett Wilson and Chris Olave in the College Football Playoff. While it is unlikely Surtain falls to the Eagles, as the Cowboys seem to be in love with him, he would be a great addition to the Eagles depleted secondary.

Finally, Slater is 6’3”, 315 lbs, and is widely considered to be one of the top linemen in the draft. The Eagles’ line was abysmal last year, as Carson Wentz was the most sacked QB in the league, and he didn’t even play the last few weeks. Slater has NFL ready strength and technique and has prevented some NFL players from getting to his quarterback, (most notable among them was Chase Young, the second pick in last year’s draft). Slater has experience, as he was a three-year starter at Northwestern. With an Eagles offensive line that has more holes in it than Swiss cheese, adding Slater can only help sure up the offensive line and keep Jalen Hurts’ jersey clean this year.

With the draft beginning on April 29, the Eagles have had months to figure out what they want to do with their pick. In a draft loaded with talent, it would be difficult to make a wrong pick, but general manager Howie Roseman has a history of royally messing up on draft night, like when he picked JJ Arcega-Whiteside over DK Metcalf and Jalen Reagor over Justin Jefferson in consecutive years. With Roseman on the hotseat, his job could depend on a great draft, and the Eagles desperately need a great draft if they want to turn it around.