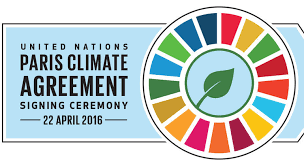 United Nations graphic from the original signing of the document under the Obama-Biden administration.

In the days since his inauguration, President Biden has signed a flurry of executive orders aimed at fulfilling many of his campaign promises, including action against climate change, fighting for social justice, creating a more centralized COVID-19 response, and reversing many of the Trump administration’s policies.

There has been a lot of misinformation and misunderstandings about what these executive orders really mean; here’s a general summary of two of his orders focused on combating climate change.

Rejoining the Paris Climate Agreement and Cancelling the Keystone Pipeline

The Paris Climate Agreement was on the monumental climate change and foreign policy agreements of the Obama-Biden administration. The agreement (signed by 194 countries) is built on the idea that decisive action and measurable standards are needed to combat climate change. The biggest goal of the agreement is limit global warming to below 2 degrees Celsius (35.6 degrees Fahrenheit) relative to pre-industrial levels. More information about the details of the plan can be found on the United Nations’ website.

The Keystone XL (KXL) pipeline is a tar sands oil pipeline that has been in construction “limbo” since the Obama administration. President Obama declined to allow construction — then President Trump gave the company the permits they needed to continue. President Biden then signed an executive order cancelling any further construction. The KXL pipeline would move the tar sands oil from Nebraska to western Canada. It has been protested since at least 2011 by indigenous peoples, environmental activists, farmers, and those that live along the route of the pipeline.

There have been plenty of arguments against both of these executive actions, including a disbelief in the true danger of climate change (the vast majority of scientists agree that climate change is an imminent threat) and the idea that both staying in the Paris Climate Agreement and cancelling the KXL pipeline will cost the nation too many jobs to bear.

The climate change agreement has already been repudiated plenty of times, but the argument that it will cost Americans jobs is a little more nuanced. Being a part of the Paris Climate Agreement will cost jobs in industries that are already shrinking as more and more parts of society shift away from fossil fuels and other unsustainable resources. Granted, that sounds bad on its face. However, there have been many studies done specifically into how the Paris Climate Agreement will affect American jobs and industries. According to the Milken Institute, job growth in the United States continued to climb following America’s entry into the agreement (before the Trump administration entered office). Further, a study conducted in 2020 by Energy Futures Initiative and the National Association of State Energy Officials determined that jobs in the clean energy sector (what will ultimately benefit from the agreement) outpaced more environmentally-unfriendly energy sectors in job growth: 54,000 jobs created in 2019 by clean energy — only 18,000 jobs in oil and gas. The energy sector, by nature, has been growing faster than older forms of energy in our country. The Paris Climate Agreement is looking to shift those jobs in oil and gas to jobs in clean energy.

The other part of the job loss argument hinges on the cancellation of the KXL pipeline. Cancelling the Keystone pipeline will cost American jobs. The cancellation of the pipeline will cost about 1,000 jobs in the short term according to TC Energy (the company that is building the pipeline); this job figure was expected to reach around 42,000 jobs at its peak (according to a State Department report from 2014), with almost all of these being temporary construction jobs. According to that same report, there would be only 50 permanent jobs once the pipeline is complete. By cancelling the pipeline, Biden sacrificed 1,000 current jobs and 40,000 temporary (non-guaranteed jobs, it was just an estimate) to help protect the environment and the rights of those that live on and around the land.

There are many communities that have been built around (and therefore livelihoods that depend on) the oil and gas industry. Workers in the United States should be guaranteed that they will have a way to provide for their families and loved ones. Does oil and gas do that right now? In the immediate future, yes. However, those jobs are disappearing. The transition from oil and gas to clean energy is already happening, whether Biden had taken action or not. Most notably, General Motors (who produces Cadillac, GMC, Chevrolet, and Buick), have said they’ll make all factories and facilities carbon neutral by 2040 and make 40% of their American car models electric by 2025. This transition to clean energy is creating jobs that will replace the ones lost in the oil and gas industries. The goal of President Biden’s executive orders on climate change aren’t to ban those methods of energy, but to speed up the already-inevitable transition.

Why is any of this important?

Staying in the Paris Agreement and cancelling the Keystone pipeline are some of the most important steps our government can take to mitigating the effect of climate change. Climate scientists have continued to predict (and warn) that the natural disasters we saw over the past year, most notably the record-breaking fires and hurricanes, will become more common place. Climate disasters cost the government over $95 billion in 2020, and by taking action against the climate crisis, especially staying in the Paris Agreement and cancelling the KXL pipeline, we can begin to bring that price tag down.